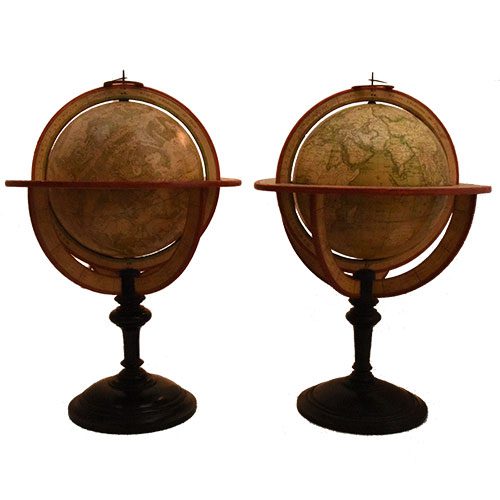 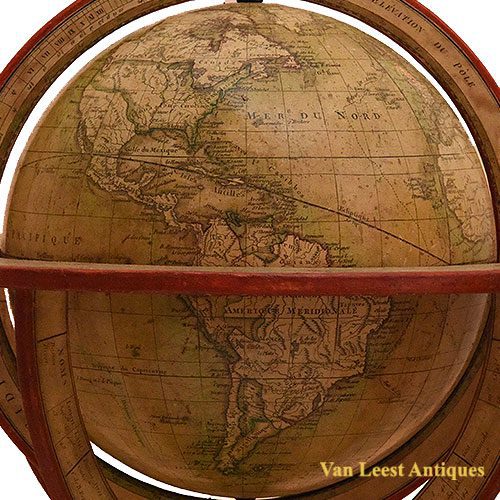 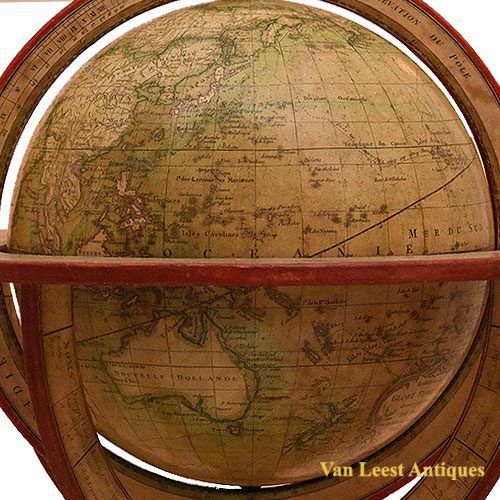 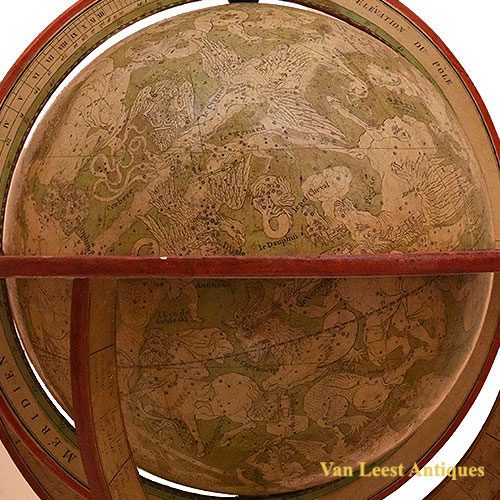 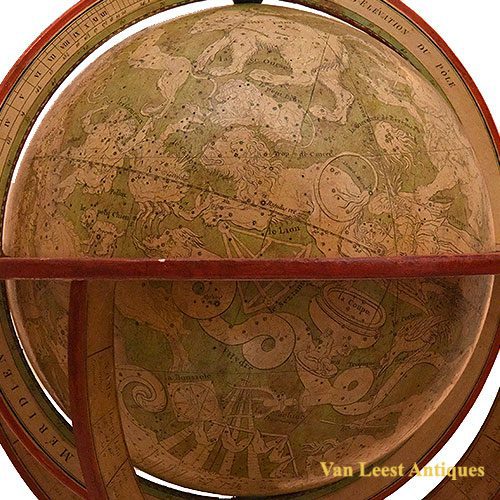 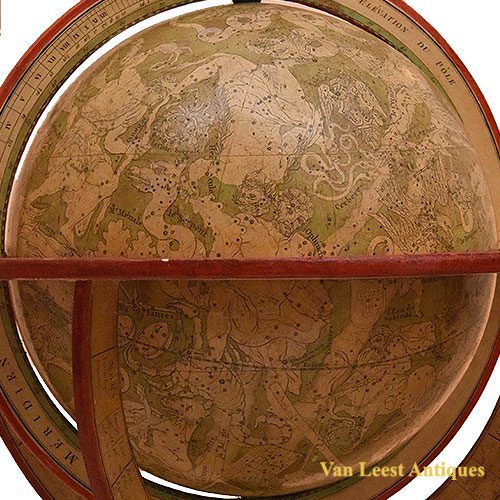 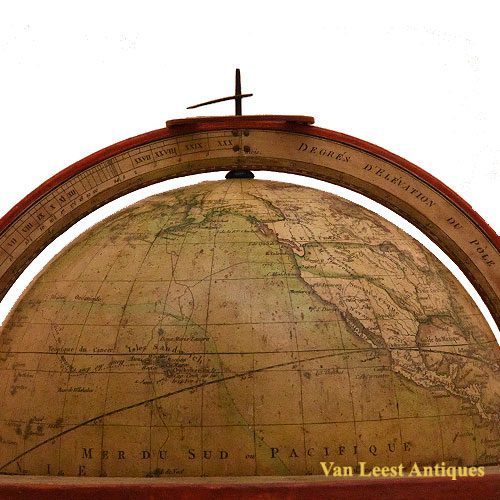 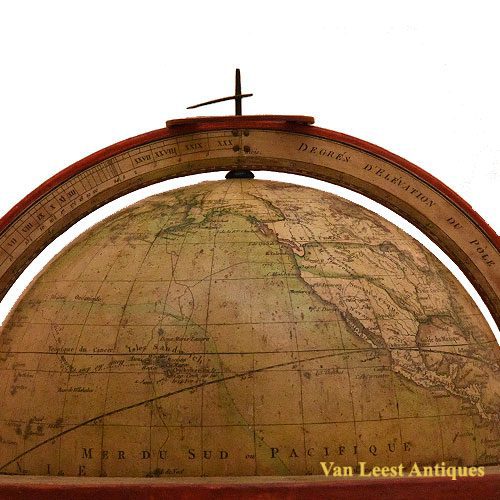 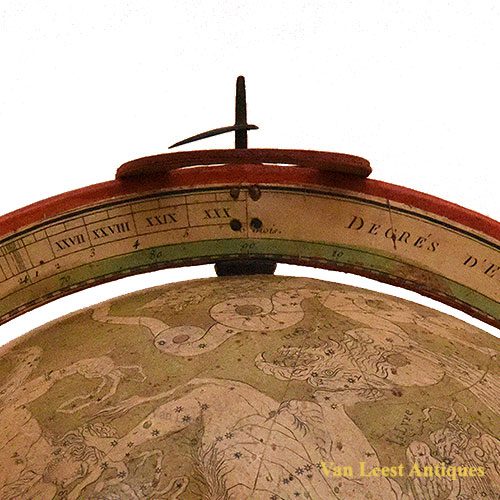 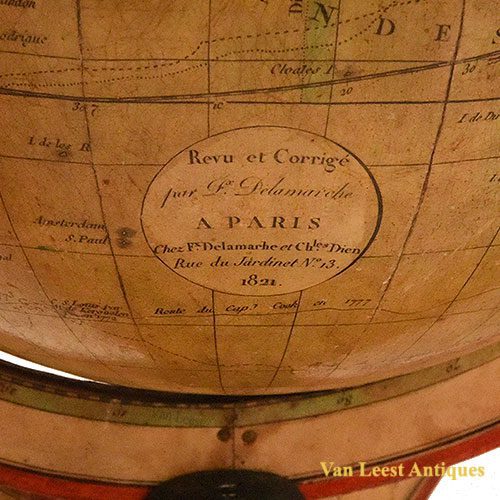 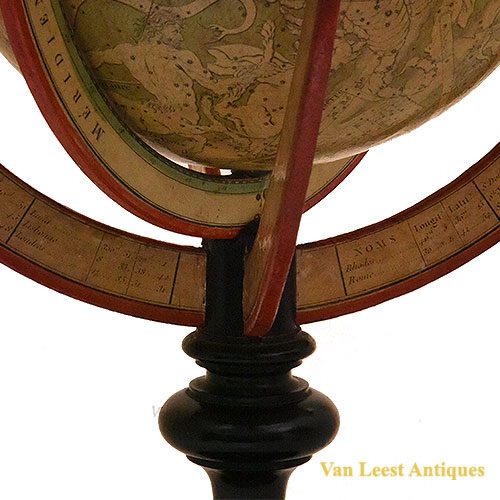 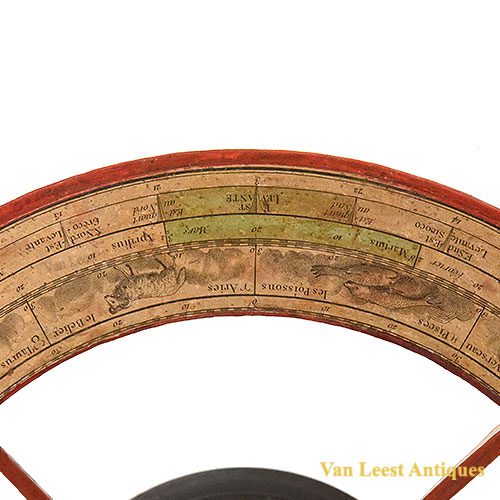 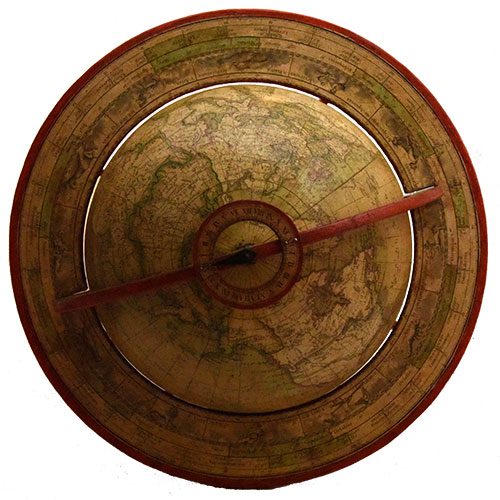 A terrestrial and Celestrial Globe by Felix Delamarche, 1821.

This finely colored terrestrial globe with 12 engraved and colored paper gores on papermache/plaster sphere, papermache full meridian and horizon ring, turned wood stand. The globe is mounted on a turned wooden stand from which four arms protrude, holding up the horizon circle. Each arm gives the latitude and longitude from the Paris meridian for several  cities. There is a full papermache meridian and horizon ring, on top is an papermache hour ring graduated I-XII (two times) with a metal pointer.  According to the information on the globe itself, it was published by the Maison Delamarche when it was under the management of Felix Delamarche. The Cartouch gives: Reduction de Globe Terrestre dressé par Ordre / DU Roi / Par le S. Robert de Vaugondy / Geographe And Revu par F. Delamarche A Paris / chez Fx. Delamarche et Ch les. Dien / Rue du Jardinet no 13 / 1821.

This celestial globe is covered with 12 printed gores, on papermache/plaster sphere, papermache full meridian and horizon ring, turned wood stand. The globe is mounted on a turned wooden stand from which four arms protrude, holding up the horizon circle. The globe gives “Par le S. Robert de Vaugondy”. The globe is undated and the star positions correspond to 1800-1825.

Info Delamarche : Founded by Charles François Delamarche who entered the globe industry as successor to the Robert de Vaugondy family of map and globe makers to King Louis XVI. Delamarche obtained the shops of many of his local competitors, which enabled him to produce globe models in many different sizes. He also republished many Robert de Vaugondy maps and globes. Charles worked with Charles Dien, a cartographer. In 1817 Felix Delamarche, son of Charles, took over the business which stayed in the family until 1847, when taken over by Grosselin.