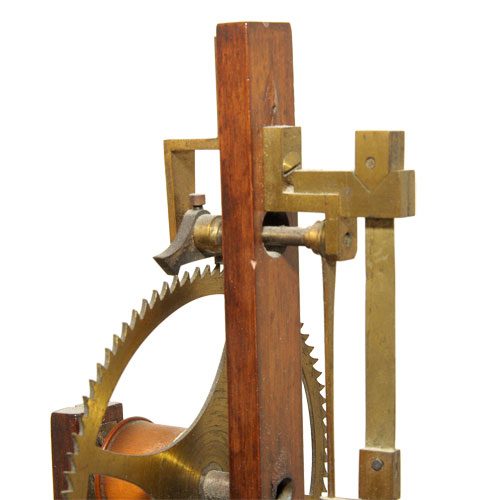 A single brass pendulum and anchor escapement model on a mahogany base. Measurements 11 x 13 x 35 cm.

Pendulums in clocks are usually made of a weight or bob (b) suspended by a rod of wood or metal (a), see picture 5. To reduce air resistance (which accounts for most of the energy loss in clocks) the bob is traditionally a smooth disk with a lens-shaped cross section, although in antique clocks it often had carvings or decorations specific to the type of clock. In quality clocks the bob is made as heavy as the suspension can support and the movement can drive, since this improves the regulation of the clock (see Accuracybelow). A common weight for seconds pendulum bobs is 15 pounds (6.8 kg). Instead of hanging from a pivot, clock pendulums are usually supported by a short straight spring (d) of flexible metal ribbon. This avoids the friction and ‘play’ caused by a pivot, and the slight bending force of the spring merely adds to the pendulum’s restoring force. A few precision clocks have pivots of ‘knife’ blades resting on agate plates. The impulses to keep the pendulum swinging are provided by an arm hanging behind the pendulum called the crutch, (e), which ends in a fork, (f) whose prongs embrace the pendulum rod. The crutch is pushed back and forth by the clock’s escapement, (g,h).

Each time the pendulum swings through its centre position, it releases one tooth of the escape wheel (g). The force of the clock’smainspring or a driving weight hanging from a pulley, transmitted through t