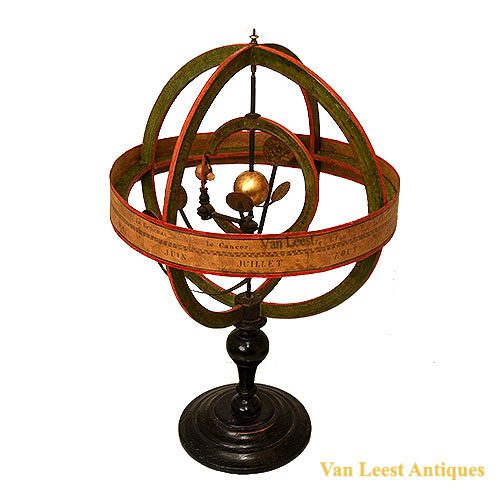 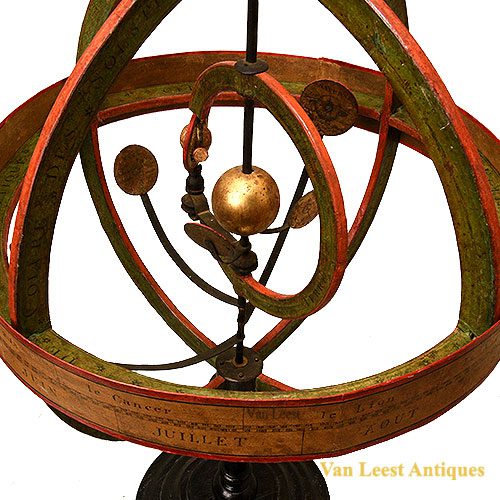 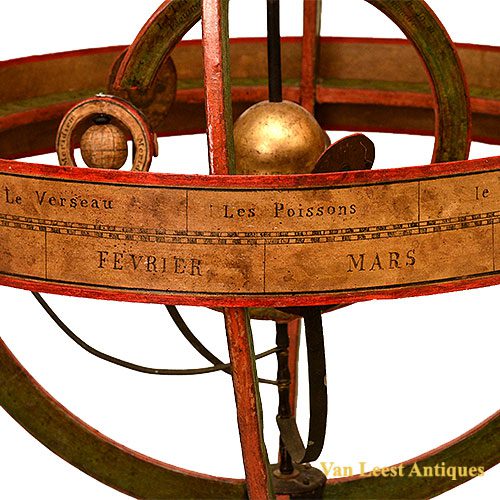 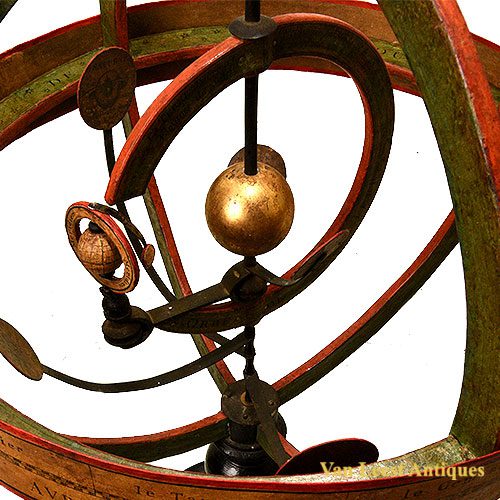 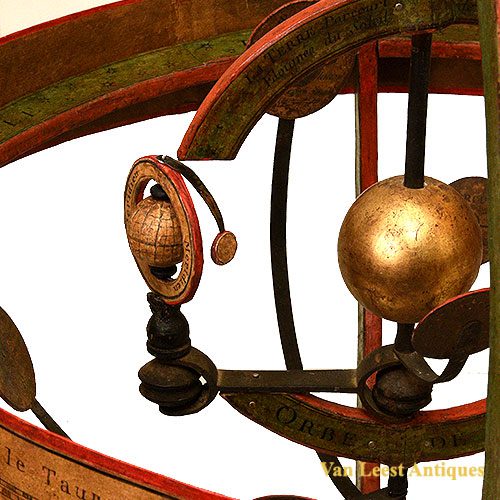 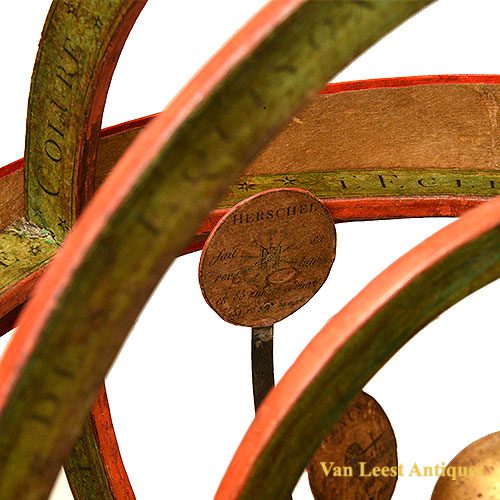 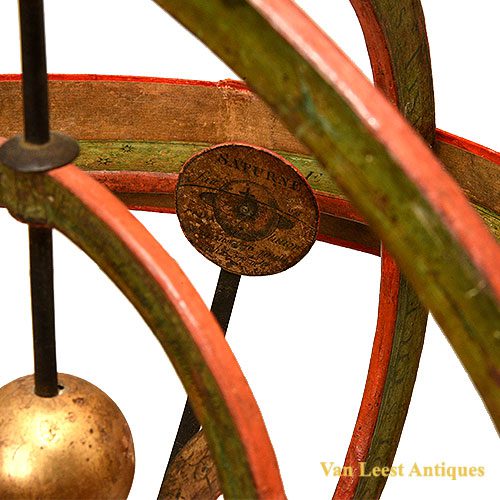 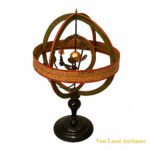 A Copernican type Armillary Sphere, probably made by Delamarche or Fortin (French), C 1800. The armillary is framed by an equinoctial and a solstitial colure ring with applied calibrations and surrounded by a circular flat zodiac band at the equator decorated with classical mythological illustrations of the signs of the zodiac corresponding to months of the year. In the center of the structure is a vertical brass rod supporting a gilt sphere representing the sun, surrounded by an orrery comprised of the 6 rotating curved brass arms, each ending with a disc indicating a planet or asteroid. In addition, the orrery has a spherical (rather than disc form) Earth — rotating on a separate apparatus — is painted with a simple map of the continents, and set within a pasteboard meridian with applied engraved paper. Earth also has a rotating moon disc attached to the meridian by a brass arm. The entire armillary structure with internal orrery is surmounted by an ebonized spherical finial, and raised on an ebonized wood stand with a circular ring-turned central standard and turned round base.

Other than Earth, the planets are represented by circular discs set atop rotating curved brass arms. Each disc has an engraved paper label on each side with title names and text in French, illustrations of the respective planets or asteroids, and brief information about their rotation around the sun. The discs, graduated by relative size to each other — though not in proportion to the actual planets and asteroids — are from inner to outer: Mercure [Mercury], Venus, Mars, Saturne [Saturn], and Herscheld. John Herschel originated the use of the Julian day system in astronomy. He named seven moons of Saturn and four moons of Uranus – the seventh planet, discovered by his father Sir William Herschel.  Earth, with meridian and moon, rotates and revolves on a separate mechanism between Venus and Mars. It is set on the end of a horizontal brass arm with two wooden ebonized pulley-type discs that are intended to be engaged and rotated with an applied string band. The disc arms and Earth apparatus revolve by turning them by hand to illustrate their movement in the solar system.

Armillary spheres are astronomical demonstration devices designed to show basic principles of the solar system. They are open in form, composed of a circle of celestial and astronomical rings. Indeed, the word “armillary” is derived from the Latin word armilla meaning circle or bracelet. Armillary spheres date back to ancient Greece and were commonly produced in England, France and Europe in the 18th and 19th centuries and continued to be manufactured in the 20th century. Nonetheless, even earlier examples were made, and in different countries. For example, Ptolemaic armillary spheres were produced in Islamist countries, reaching advanced levels as early as the 10th century.
An armillary sphere with the sun at the center is known as Copernican named after the astronomer Nicolaus Copernicus (1473-1543) who formulated a model of the solar system in which the planets, including earth, revolve around the sun. An armillary sphere with Earth at the center is known as Ptolemaic, named after the 2nd century A.D. Alexandrian astronomer Ptolemy who formulated the geocentric theory of the solar system. A Copernican armillary sphere generally illustrates the revolution of planets (and asteroids) within the solar system with a central sun sphere surrounded by either concentric planetary rings or an internal orrery with discs or spheroid planets. A Ptolemaic armillary sphere generally has an earth globe surrounded by circles representing the Tropics of Cancer and of Capricorn, polar circles, a meridian and a horizon band. Notwithstanding that Ptolemaic armillary spheres have a terrestrial globe in the center rather than the sun, they were created to show modern principles of astronomy,  including the ecliptic plane of the earth and how that relates to the apparent path of the sun and the visibility of various constellations in the zodiac throughout the year.